Hartford Has It: Top 10 Reasons Why You Belong in Hartford 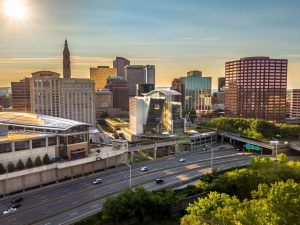 The pandemic has fundamentally changed the way we go about our daily lives, making people reconsider current living situations. The city of Hartford offers individuals the luxury of living in a less-dense area but with all the big city attractions, history, and culture. Hartford offers an affordable lifestyle all while maintaining good social distancing protocol! The following article lists how Hartford, CT is a top destination for those seeking everything from a safe lifestyle to community engagement and business opportunities.

Hartford has unique access to some of the nation’s top universities and trade schools. At the heart of the Knowledge Corridor, Hartford is in close proximity to a multitude of nationally-ranked universities such as the University of Connecticut, University of Hartford, Goodwin University and Trinity College. In total, there are 15 colleges in the Greater Hartford area and the city was recently listed as #17 in the country for college cities. Many students and millennials are finding opportunity in Hartford as several large employers and the insurance industry are actively hiring along with the fact that there are many low income/affordable housing options in Hartford.

The city’s innovation community is rapidly gaining traction across industries, evident by Brookings naming Hartford the fourth best tech city in the nation in 2018. Corporations like The Hartford, Travelers, Aetna, and Cigna are investing in programs that bring new InsurTech innovations to life.  Accelerators like Stanley + Techstars or MakerspaceCT are just two of the many resources to assist innovators in furthering the industrial revolution. According to an analysis of census data, Hartford ranks fourth in the nation among metropolitan areas with the most female entrepreneurs.

Once you’ve logged off from a fulfilling workday, it’s time to unwind with friends and colleagues downtown! If you are looking to grab a pint in an Irish Pub atmosphere, check out Vaughan’s Irish Public House or for one of the largest beer selections around, The Tavern Downtown.  If you need a good laugh, Hartford has comedy – uncontrollable laughter awaits at City Steam Brewery comedy nights or the Sea Tea Comedy Theatre on Asylum Street. If you’re looking to go somewhere new, try Hartford’s first European-style food hall that contains retail merchants, bars and event spaces- Parkville Market!

Check out Hartford.com for a list of events happening in the city. 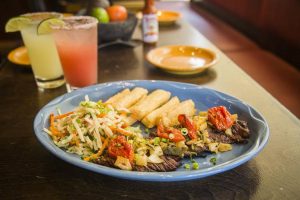 Hartford is proud to have excellent restaurants that satisfy most nationalities. Hartford offers everything from world famous pizza to Mexican to Middle Eastern. Places range from cheaper spots to fine dining that are perfect for several occasions. Here are a few popular spots: 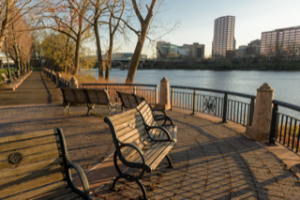 Hartford is made up of 37 parks and over 2300 acres of park land, including two municipal golf courses – in 2017, Keney Park Golf Course was named the third best public course in the state by Golfweek. Along the Connecticut River, the longest river in the New England region, the Riverfront Recapture provides walking paths and hosts cultural events, concerts and food truck festivals.  Hartford’s location gives you the world at your fingertips – the Long Island Sound and mountain ranges can also be reached in less than an hour.  The Green Mountains of Vermont and the best skiing in the North East are about two hours away.  Big city visits aren’t far either, with Boston a 90-minute drive and NYC just over two hours. 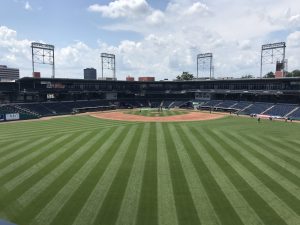 If playing sports or outdoor activities aren’t your game, get out and root for some of the local professional sports teams.  The PGA tour makes a stop in Greater Hartford every year with the Travelers Championship.  Hartford proudly boasts the new Dunkin’ Donuts Park, the home of the Yard Goats AAA Baseball that was named the league’s best stadium in 2018.  In addition, Connecticut’s Pro Soccer team –  Hartford Athletic – play in Hartford’s historic Dillon Stadium.  Hartford Wolf Pack (AHL hockey) takes the ice in the XL Center and is fun for all ages.  Of course, Connecticut is home of the UConn Huskies NCAA athletic program, winners of multiple NCAA tournaments.

A short drive from Hartford you’ll find two of the largest casinos in the country, Mohegan Sun and Foxwoods, which offer world class entertainment, fine dining, shopping and of course slot machines and table games. Hartford also has the largest convention center between NYC and Boston, which overlooks the CT River and is accessible to downtown.

Hartford is constantly improving accessibility to become more “urban center friendly for pedestrians, cyclists and new businesses.”  CTfastrak is Connecticut’s first bus rapid transit system that utilizes a bus-only roadway for all or a portion of the trip. More recently, the Hartford Line is a commuter rail service between New Haven, Connecticut, and Springfield, MA, using the Amtrak-owned New Haven-Springfield Line. The DASH shuttle is a free shuttle service to the various downtown destinations including the Convention Center, hotels and restaurants. The city is built to accommodate other forms of transportation besides ride sharing such as biking. In December of 2016, Harford received the coveted “bike friendly” designation from the League of American Bicyclists. 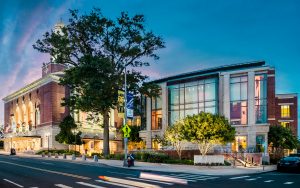 The Bushnell Center for Performing Arts. Photo courtesy of The Bushnell

As one of the oldest cities in the country, Hartford offers knowledge and culture to stimulate your curious side.  Greater Hartford has a vibrant arts community with 300 art venues and cultural attractions. Hartford is home to the Mark Twain House, where most of his famous works were written and his family was raised.  National Geographic has named it one of the 10 best historic homes in the world. Take the bus or walk about the city to take in beautiful architecture, sculptures and art works.  Visit the Wadsworth Atheneum, the oldest continuously-operating public art museum in the United States, which opened its doors in 1844.

If you love the theatre, then Hartford has it! Hartford Stage won a Tony Award for Outstanding Regional Theatre and is renowned for producing innovative revivals of classics, as well as provocative new plays and musicals. The Bushnell Center for the Performing Arts brings audiences the world’s finest musicians, Broadway shows, orchestras, dance companies, plays and other special attractions.

Hartford attracts and celebrates all cultures. In the Greater Hartford area, around 240k people speak a language other than English at home. The most common languages spoken are Spanish, Polish, and French (taken from 2015 Census data). According to 2017 Census data, the largest immigrant communities are Jamaican (18,555), Indian (16,753), and Polish (15,281). 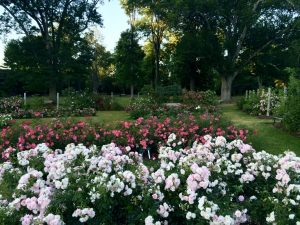 In 2017, Mayor Luke Bronin established the City of Hartford Office of Sustainability to advance the economy, improve public health, and promote social equity through environmental stewardship initiatives. Several initiatives have been in place such as the Energy Equity Challenge and Plastic Bag Ban. The nonprofit American Council for an Energy-Efficient Economy recently named Hartford as one of three “cities to watch” and ranked it among the top 25 in its 2019 City Clean Energy Scorecard. 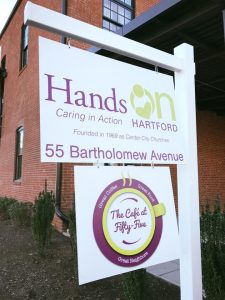 Photo courtesy of Hands on Hartford

Hartford has a strong mission-focused community that provides several opportunities for individuals to get involved. Groups like HYPE – Hartford Young Professionals and Entrepreneurs and Leadership Greater Hartford (LGH) aim to build professional networks and help take careers to the next level.  Other countless volunteer opportunities focused on the community are always accepting and encouraging participation. Here are a few:

There are many developments and improvements underway to progress Hartford. As we say here in CT, “Hartford has it,”  and we hope to see you soon!

Hartford Has It: Top 10 Reasons Why You Belong in Hartford2020-10-202020-11-02https://leadershipgh.org/wp-content/uploads/2016/07/LGH_Logo@1x.pngLeadership Greater Hartfordhttps://leadershipgh.org/wp-content/uploads/2020/10/opening-image_-photo-credit-to-the-hartford-business-journal.jpg200px200px
What’s New
About Us
Our Programs
Who We Serve
Join Our Mailing List
Members
Our Mission
To develop, connect and inspire diverse leaders to build strong and vibrant communities.
Leadership Greater Hartford

Normalizing Mental Health in Our Communities: Beyond the StigmaHome News, Uncategorized 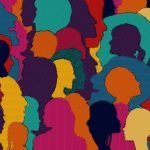